Combining scheduling with cost tracking is what farmerswife is about.

Taking this one step further, financial information is available through the integrated Financial Report Designer (FRD). This tool allows the user with adequate permissions to create reports on anything that generates revenue for the company, all from within the client application. In farmerswife the data input for the reports is allocated within Projects, Media Orders and Invoices. The Financial Report Designer provides several different criteria for basing the reports on: budgeted, quoted, booked, actualised/ time-reported, invoiced, etc. It allows not only to report on selected invoiced data (from Invoices and/ or selected Unreferenced Invoices) but also compares/ combines this information with the source information (quoted, budgeted, booked, time reported (used) in Project or Media Order).

All the lines provide numbers sorted into 10 number categories:

Each of those expandable categories contains the following data:

The following example displays the Sell Total and other related options, like Discounts, Total Including Tax, etc.:

The following example shows a report generated on a freelancer's reported time during a month. This resource has been booked in the timeline, but has also been added to some timereports as an extra. When generating a report, the Quantities Total will display this information as: 1 Day, 11 Hours, 13 Units.

In this case, Units are to be treated as Hours. To be able to add up Units and Hours, the template has been modified like this: instead of Quantities Total, Hours Total has been selected and a Math Operator has been created to add up Units Total + 1 Day (8 Hours) + Hours Total: 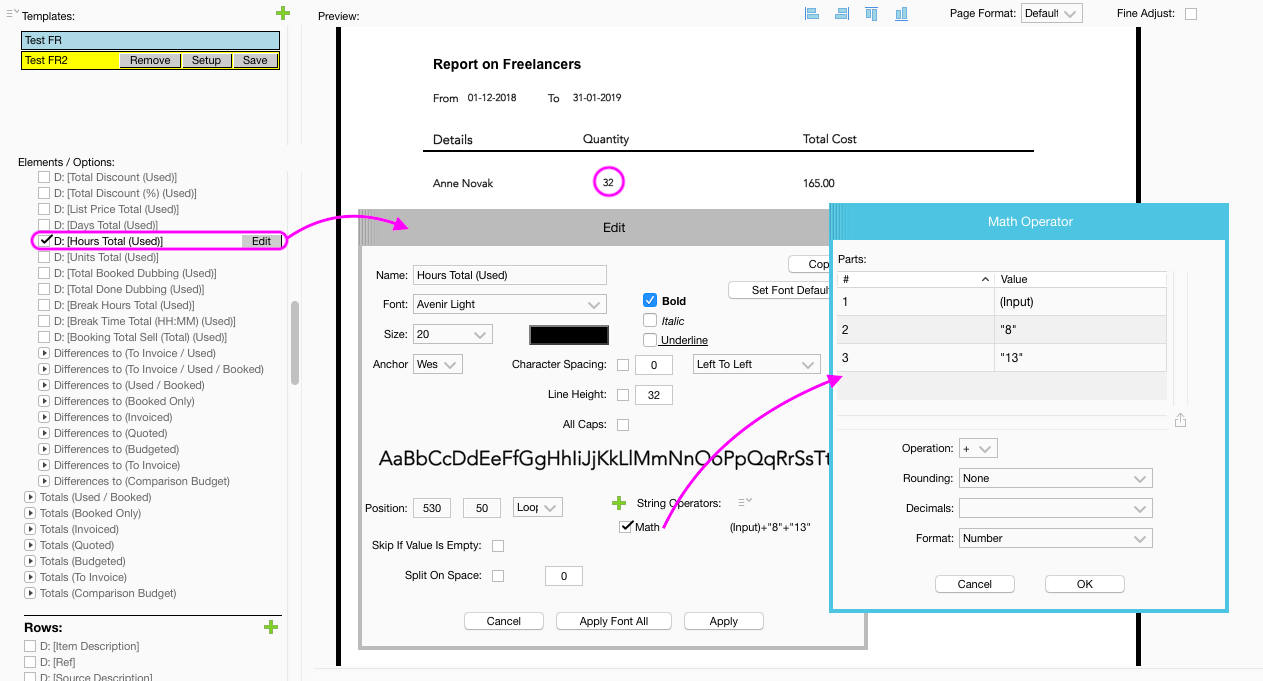 * For more detailed information about String Operators, such as Math Operators, please refer to the Print Designer Manual.

In the example below, the difference between time Used and time Booked is calculated by selecting Totals (Used) > Differences To (Booked Only) > Diff. Quantities Total (Used) and > Diff. Buy Total (Used):

The Financial Report designer looks at the following setting in the Invoice Creator: Calculate Tax Amount Before Discount Yes/No.

If this setting is on, the Tax in the Financial Report designer is calculated on the Project total before discount.

If the setting is off, the Tax is calculated on the Project total after discount. 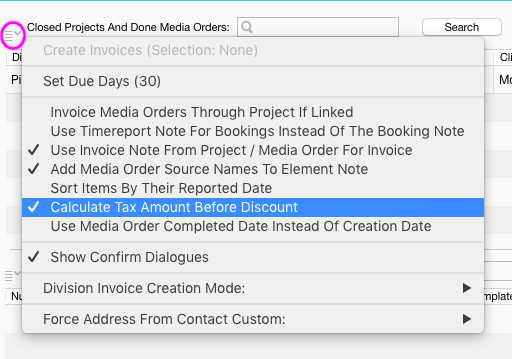 However, if an invoice is created with this setting on and later it is turned off and a Financial Report is generated on this Project, the tax amount will be different. Therefore it is recommended that this setting is configured ONCE at the beginning of using the system. There is a warning when this setting is changed: "Modifying Tax Calculation Mode After Initial System Setup Is Not Recommended. Please Confirm Changes."

The User report is typically used to calculate salaries. The example below shows that Anne was booked 9 hours and that she worked (time-reported) 9:30 hours on that day. Therefore, she will be paid for 9 hours and half of work.

Whereas the Financial report is typically used to calculate profit. The example below shows that Anne was booked 10 hours and that she worked 10 hours.

And considering that in this example the invoice takes numbers from the "used" data, the resulting two invoices will be calculated over 10 hours, and not 9 and half.