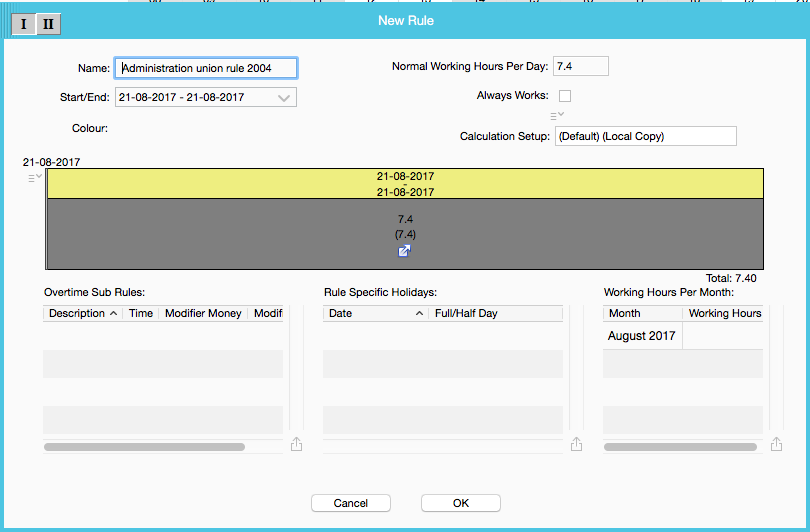 Name: The name of the rule. For example “Administration union rule 2017” or “special rule”.

Normal Working Hours Per Day: The number of hours per day that is used when calculating vacation, etc.

Start/End: The start and end dates of the rule. The working hours per day, working periods, overtime sub rules, etc for this rule only apply between these two dates.

Always Works: If yes, users with this rule will be considered working their normal amount per day even when they aren't booked. Basically, their worked hours is not affected by their bookings. Also, because of that, overtime sub rules do not apply to them.

Calculation Setup: is the math behind all calculations. Allows to create own calculations (math operations) and even own values - very advanced.

There are three options:

- Just One period (from start - end = one closing point!
- Monthly - automatically last day of the month
- Every 2 month - last day of every 2nd month

- Day (e.g. 8 hours per day.. so it calculate the total hours to work per month and will deduct weekend+public holiday)

- Period (e.g. 160 as negotiated per period, it calculated the hours per day and will deduct weekend+public holiday)

This can be specified in several ways: By setting the total amount of hours per period, by setting the amount of hours per day or a combination of both. For example:With the periods setup above, a user should for example work 7.4 hours per day (shown in parantheses) between 2004-03-01 and 2004-03-28, which adds up to 133.2 hours in total during that period.Click on the numbers in the periods timeline to change them.

Period Bookings: Clicking the square inside a period will bring up the period bookings dialog
Here, you can define bookings that are not bound to a specific date, but to the whole period. For example, you might have such a work that requires you to plan things at home for 5 hours per period (month), but you do not want to book it on a specific time.
Create a new period booking by right-clicking in the list and choosing “New”. The “Affected By Periodic HIL Modifier” setting specifies whether or not these hours should be included in “Period Hours” during periodic HIL modification. See Periodic Time In Lieu Modifiers for more information. 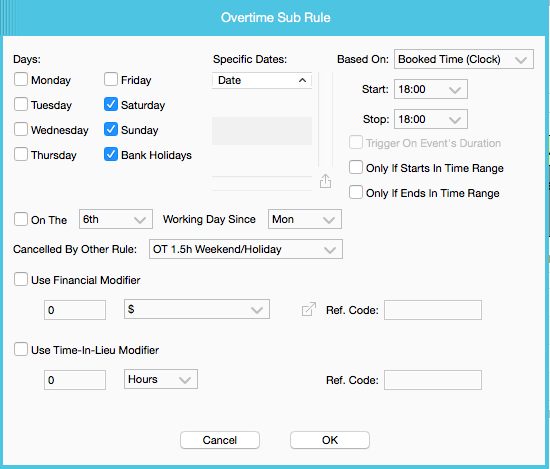 Overtime sub rules are for compensating for inappropriate working hours. For example, you might want to give the user some extra money on his/her salary if he/she works on a Saturday or after 19:00 at night.

Overtime compensation can be in either time or money.

“Days” specifies on which weekdays the overtime sub rule should apply. If you just want the sub rule to apply on a few specific dates, you can add those dates in the “Specific” dates list.
“Time” specifies the start and stop time when the sub rule applies.

If “Use Financial Modifier” is checked, compensation will be given in the form of extra money. The amount of money can be a fixed number, an hourly rate, a rate for each hour that was begun or a factor of the user’s buy rate.

If “Use Time-In-Lieu Modifier” is checked, compensation will be given in the form of Hours In Lieu. This is the same as worked time. So for example, if a user earns 1 hour of HIL from an overtime sub rule, that is one more hour of worked time or one more hour of overtime that he can use to take a day off. The amount of HIL can be a fixed number, an hourly rate or a rate for each hour that was begun.

Rule Specific Holidays
This is a list of holidays that are specific for this rule. For example, some users might have negotiated for Christmas Eve to be a holiday, despite it not being in the public holiday calendar for the company.