When starting up the farmerswife server for the first time it will check if a previous database exists. If it can't find one, it will prompt you to select either the Demo Database or an Empty Database.

If might also detect that there is ‘No License File’ integrated to the system yet and will ask if it should ‘Run Demo Version’. Click on ‘Yes’ to continue. The demo version is a full functional version of farmerswife which allows 40 startups of the server to run 60 minutes each. 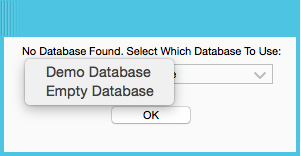 This is a Basic database containing one example object within each category, including an Advanced User with all permissions, and a Web User.
In the server setup > Users Tab, rename the main Advanced User "Peter" to yourself.

When logging in the first time to the Empty Database the preconfigured Objects will be displayed in the Hourline:

The first thing to do is to change the names to correspond with people and objects in your company. This is done in the Object Manager described in the next section.

The Demo Database is richer than the Basic DB and contains more Users, Objects, Services, Projects and Bookings that can serve as examples.

If you want to run some tests with a copy of your production database, please take the steps as outlined below.

With either database, to login the first time with the client application:

For an extended test period or if you've already purchased the system please email license@farmerswife.com and add your company name and the local static IP of the machine that is going to host the server software.

The farmerswife license file determines which product version, additional modules and users are available within the system. You need to add them to the Server application. Press ‘Quit’ to stop the farmerswife Server and integrate the license files by copying the ‘license.dat’ and 'license.txt’ files previously received via e-mail to the ’system’ folder located within the 'farmerswife’ folder structure. Follow the instructions from the email you received.

Too Many Active Users / Administrators

If you chose to use a demo database, note that depending on how many farmerswife users are activated through your license, a warning message might appear when starting the Server application. If you have purchased less users than configured in the demo DB, this will trigger the warning message that 'Too Many Active Administrators' and/or 'Too Many Active Users' are setup in the system and you are being informed that the Server application will shut down within 5 minutes. Deactivate some users by accessing the ‘Server Setup’ on the farmerswife Server log window and go to the ‘Users’ tab. To deactivate a user, click on its name, set the 'Active' button to No and click Ok.

This might be needed when running on Beta versions, or new Service Packs or in general when you first want to run an upgrade check, or evaluate new modules or new functionality on a separate TEST fw Server environment.You can always use a fw Server app in "Demo Mode" (also with your database (DB) files) and it will run for 60 min. and you have 40 sessions. An additional "TEST fw Server" license can be provided upon request, available for customer with a valid service agreement in place; include in your request the Company Name, the info of the local static IPv4 address and the used Operating System of the machine to host the TEST fw Server.IMPORTANT:farmerswife supports Push and Feed functionality, and various other email notifications (if enabled); and it can be integrated to various other 3rd party systems; and you can also break out folder structures to network shares which are normally locally hosted on the fw Server's host machine, etc.All this functionality is therefore also enabled by default on a separate new TEST fw Server environment you might be using. And if not handled with care and turned OFF in a good way, this will lead to duplicate or wrong notifications to your users, or update wrong information on your real live Production farmerswife system.Please read on.For a "half way realistic" test environment, copy the "system" folder from your fw PRODUCTION Server, more info below! Depending on how you use farmerswife, you might also need to copy other files or folders.Use the "server.cfg" file to control certain vital parts of your separate TEST Server:This "server configuration" file (server.cfg) provides the option to change certain "General tab" settings "outside" of the actual fw Server application.You use this file to ensure certain settings are NOT enabled on your TEST fw Server BEOFRE it gets started.These settings/variables are available by default on this version:FW_IPFW_PORTEXTERNAL_PORTHTTP_PORTHTTP_HOMEUSE_SSLHTTP_SSL_PORTHTTP_UPLOAD_PORTFTP_ALLOWFTP_PORTFTP_PASV_PORTFILE_PORTPROXY_FILE_PORTFILE_PORT_LOWFILE_PORT_HIGHMAIL_OKMAIL_SERVERMAIL_PORTMAIL_USERMAIL_PASSWORDUSE_SQLSQL_USERSQL_PASSSQL_DB_HOSTSQL_DB_NAMESQL_PORTPRJ_CHECK_FOLDERSMAIL_DEBUGBARN_ACTIVEHTTP_XML_PORTWEBCLIENT20_ENABLEDWEBCLIENT20_PORTWEBCLIENT20_COM_PORTALLOW_FORCE_RUN_NIGHTLY_SCRIPTALLOW_FORCE_RUN_PLAY_BILLABLESTIMED_SCRIPTS_INTERVAL_SECONDSMSAD_ENABLEDUSE_EXCHANGEREAD_SCRIPTS_AS_UTF8GOOGLE_SYNCCIRKUS_ENABLEDFORCE_SHUTDOWNUSE_MSAZUREADPASSWORD_POLICIES_SRC default_password_policies.jsonUSE_THREADSThese are additional settings/variables not set by default:APNS_ENABLEDEXCHANGE_DEBUGHTTP_DEBUGLDAP_DEBUGSince v6.4 these two settings/variables are special, because on a "standard" and "not externally proxied" fw Server installation, both of these MUST have the SAME port value!FILE_PORTPROXY_FILE_PORTOn our "Demo DB" these settings/variables will look like this:FILE_PORT 24000PROXY_FILE_PORT 24000Note: Only licensed features and their variables will be effected by any changes within this .cfg file.A proper fw Test installation works like this:- Quit your farmerswife PRODUCTION Server.- Create a file called "server.cfg" within your PRODUCTION fw Server's "system" folder.- Start up your PRODUCTION fw Server for the first time with the "server.cfg" file in place, then Quit it again, to trigger flushing your existing configuration settings into this "server.cfg" file.- Install the TEST fw Server application on your test machine.- Now copy at least the "system" folder from your fw "production" Server to within your "test" fw Server's installation folder. If you have the time, feel free to also copy the "files" folder; and if you have customized anything within the "html_templates" or "/lib/scripts/...", copy these sub-folders, and IF you are using anything "customized" within these folders, the related files might need to be copied as well.BEFORE (!!!) the first start-up of the TEST fw Server, edit the server.cfg file with a text editor application within your TEST fw Server's "system" folder and add or set at least these variables to "0", like this:MAIL_OK 0USE_SQL 0APNS_ENABLED 0MSAD_ENABLED 0USE_EXCHANGE 0GOOGLE_SYNC 0CIRKUS_ENABLED 0USE_MSAZUREAD 0Save the server.cfg file. Copy it again to a "safe" location on your test machine, so you can re-use it for the next DB file updates. Please read on.Now start your TEST fw Server application.VERY IMPORTANT after the first launch and after each update of database files of a separate TEST ServerGo to the running fw Server application > Setup > General tab > "Full Backup Time" and set it to "Never"!The "server.cfg" does not yet support this feature, and if you do not turn it off, this might interfere with your actual real "Full Backups" from your "in-production" farmerswife system!NOTE: to test "Allow Mail" functionality from a "test" fw Server, you can use for example a service like "Mailtrap" (https://mailtrap.io).You then need to update this variables with your access details:MAIL_OKMAIL_SERVERMAIL_PORTMAIL_USERMAIL_PASSWORDRepeat the above steps, for any upgrade or repeated update of the "system" folder on your Test fw Server.We recommend to save the correctly configured "server.cfg" file for the TEST environment in a good way, and then simply replace it prior to the first start-up.NOTE: Once you have properly configured your TEST fw Server as described above, you can save time in the future by only copying these files from your PRODUCTION fw Server > from within the "system" folder:- current45.efdb- fwdb.db3- histories.db3- despatches.db3- log.txt... and "paste" into your TEST fw Server's "system" folder and "replace" the previous files. Then rename the fresh "log.txt" to include "date-of-copying-yyyy-mm-dd_InitialsWhoCopied_log.txt". This helps on keeping track.