PrerequisitesThe Time Report Sheet (also referred to as TR Sheet) was created for the Task Users (Advanced Users) who work on several different Bookings every day. The standard way of time reporting in farmerswife requires a lot of mouse clicka. The Time Report Sheet was created to avoid this. It’s designed to be like a big table, with full keyboard navigation and have everything in one place. It is possible to create “Ad-Hoc” Time Reports, e.g. work that was not planned and not booked in advance.

Here are the main permission flags that apply to the Time Report Sheet:

Time ReportingEnter the Time Report Sheet by clicking the icon next to the “Timereports” icon in the Toolbox > Todo tab: 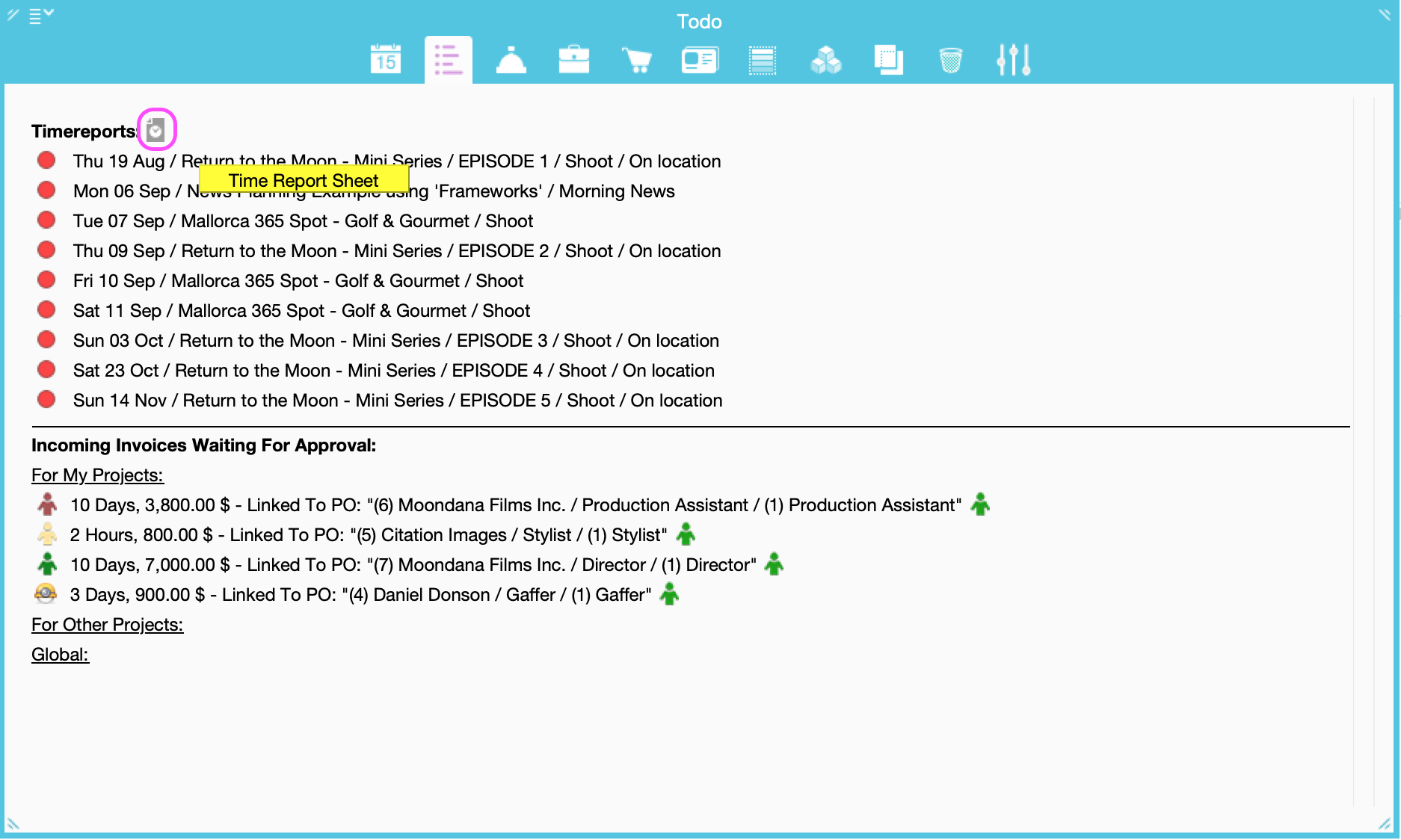 See below a picture of the Time Report Sheet window, along with some explanations: 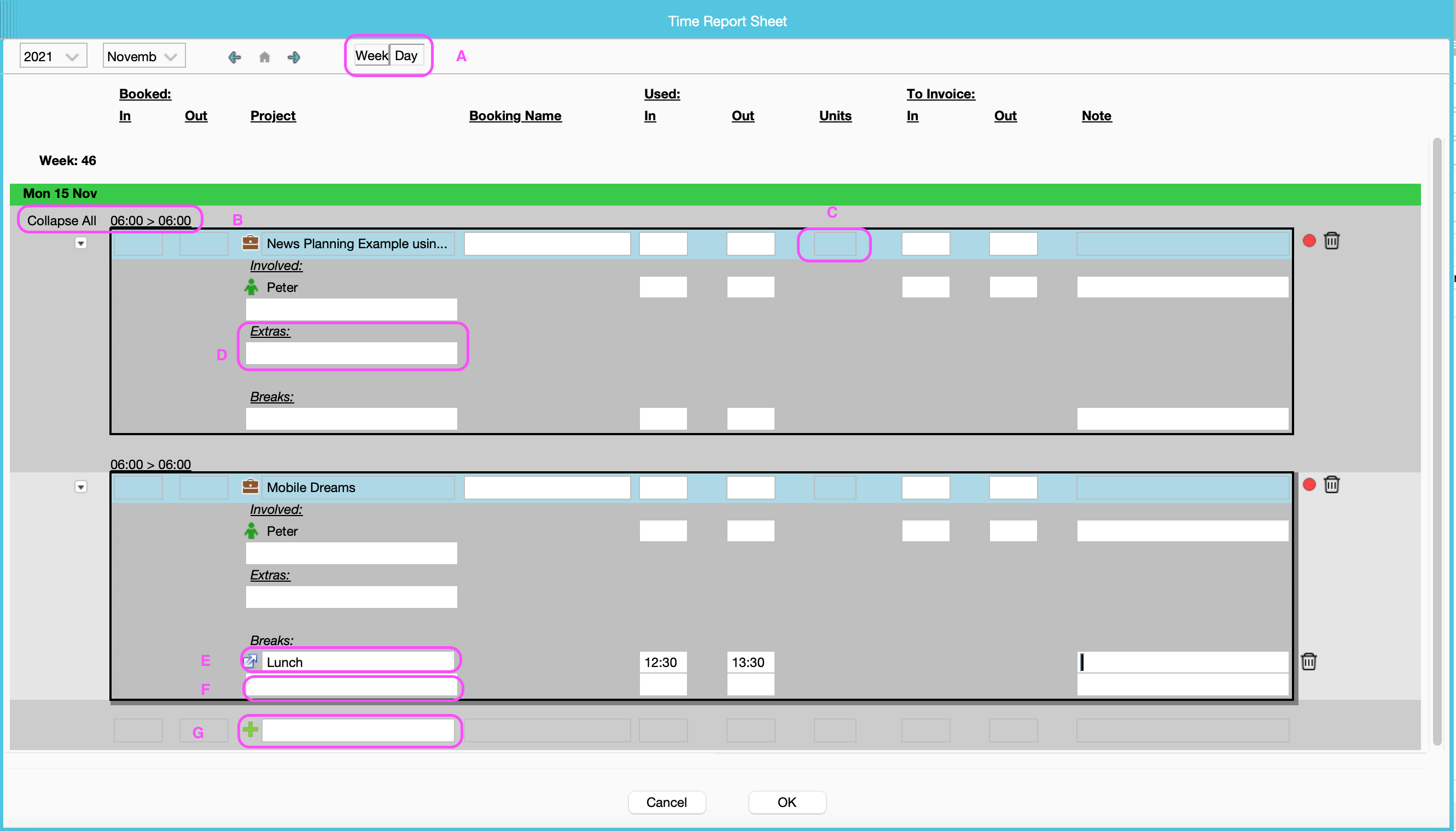 Creating Ad-hoc Time ReportsAn Ad-Hoc Time Report is a Class Booking that is not considered to be booked in advance. Typically, this occurs when the day is interrupted by some unforeseen, urgent work.  The reason for differentiating between “Ad-Hoc” and normal Bookings is to get accurate financial reporting. If a normal Booking is booked from 09:00 11:00 and time reported the same, then the Financial Report will show “Booked: 2 hours” and “Used: 2 hours”. But on the same Ad-Hoc Booking, it will show “Booked: 0 hours” and “Used: 2 hours”. This is an important detail for example when trying to improve estimates by learning from past projects. To create an Ad Hoc Time Report, start typing the name of the Project in the empty line at the bottom of the day. This will bring up the “finder” window under the cursor, filtering by the string you type. When the Project is selected, press OK to create the Time Report. Ad-Hoc Time Reports can be created for both Project Bookings and Media Order Bookings. To create a Media Order Booking, type the name of the Media Order instead. The Ad-Hoc Time Report looks almost identical to normal Bookings, except for some details: 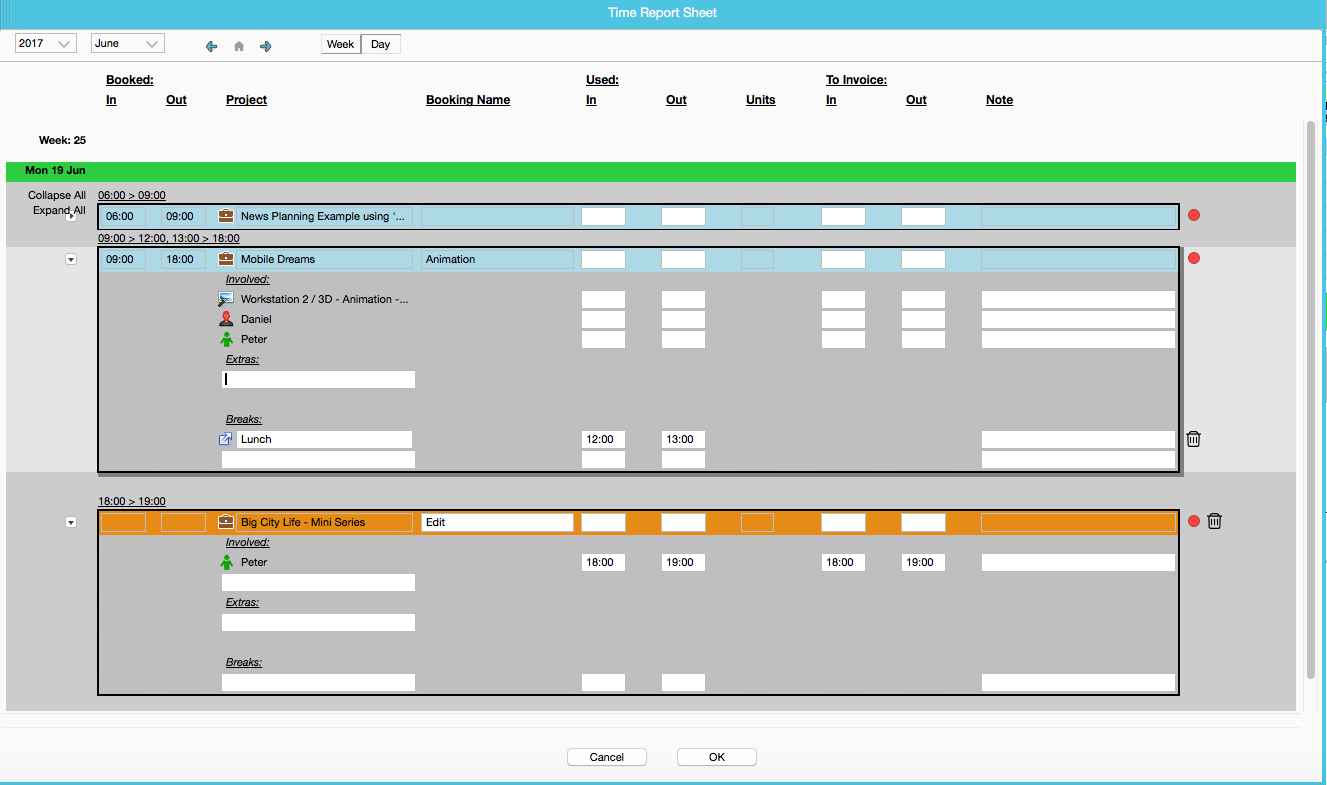 There is no in or out time in the “Booked” columns (on the left side). This is because it’s not considered to be booked at all. Another detail is that there is a “trash can” icon for the whole Booking. The reason is that it’s OK to delete Ad-Hoc Time Reports, while it’s not OK to delete normal Booking because it would make financial reporting inaccurate.

Punch Clock SupportIf the Punch Clock is activated on the server (Server Setup > Users > Use Punch Clock) and the corresponding permission flags are set to Yes for the User, there is an additional section at the top of each day in the Time Report Sheet: 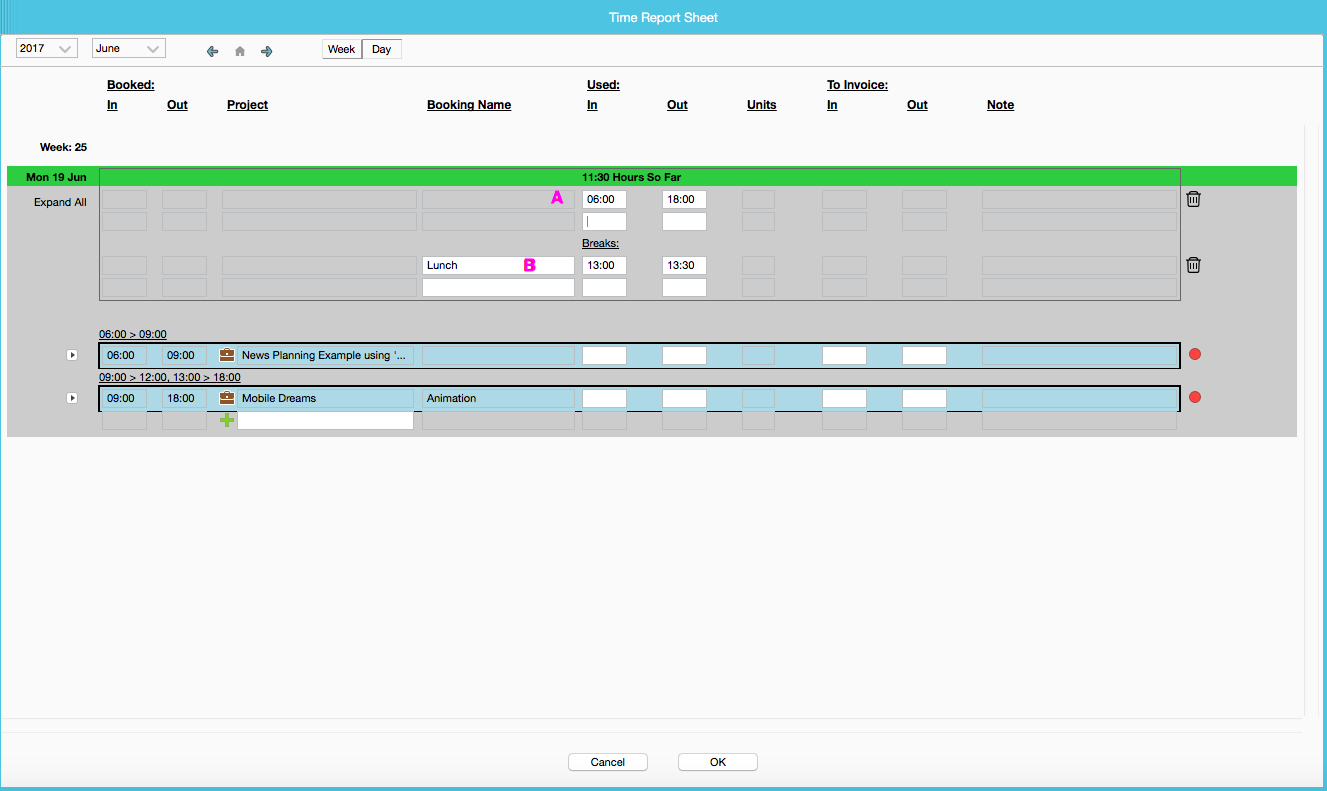 The Punch Clock is where the Users time report when they came in to work and when they left work. This may or may not cover the same time span as the Bookings on that day – this depends on the individual workflow. In any case, the User is considered to have worked between the times input through the Punch Clock. If a User did not come into work on a day, the “Skip” button can be pressed. This removes the warning “No In/ Out Time Reported Yet” and sets the number of worked hours to zero. See above for a Punch Clock section with some times reported. The User has reported that he came in at 08:00 and worked until 19:00, but had lunch between 12:30 and 13:00. So the total hours worked are 10.30.