The built-in Import Wizard allows easy imports of Media data from existing systems. By exporting your vault/library from your current system to a CSV file, you can easily import it to farmerswife.

Prepare separate CSV files containing the information of each of your Libraries following these structural recommendations:

Row 1 should contain the column headers, which are the field names to be imported. The order is irrelevant, however if you have two columns with the same header, for example Name; please rename them to specify what they belong to, like Tape Name and Entry Name.

This first row will not be imported into farmerswife.

Each Media should be listed on a row of its own.

If the Media contain Entries, each Entry should be listed on separate rows with the Media name designated in one of the columns.

Check the information in each of the CSV files before the importing. This will save you having to make amendments later within farmerswife Library.

Save each CSV file locally or make them accessible through the network.

IMPORTANT: Run a backup before starting this process: click on Backup Now button in the Server window.

Click on the I (Import) button next to the Library where the CSV file is to be imported.

A dialog will remind about backing up the database. Select Yes.

The Select File To Import From window opens to select the CSV file. Once selected, hit Open.

A window opens to enter the Separator Character used in the CSV. Always set it to comma (,); farmerswifewill not allow you to continue the Import if the separator is incorrect. Hit OK. 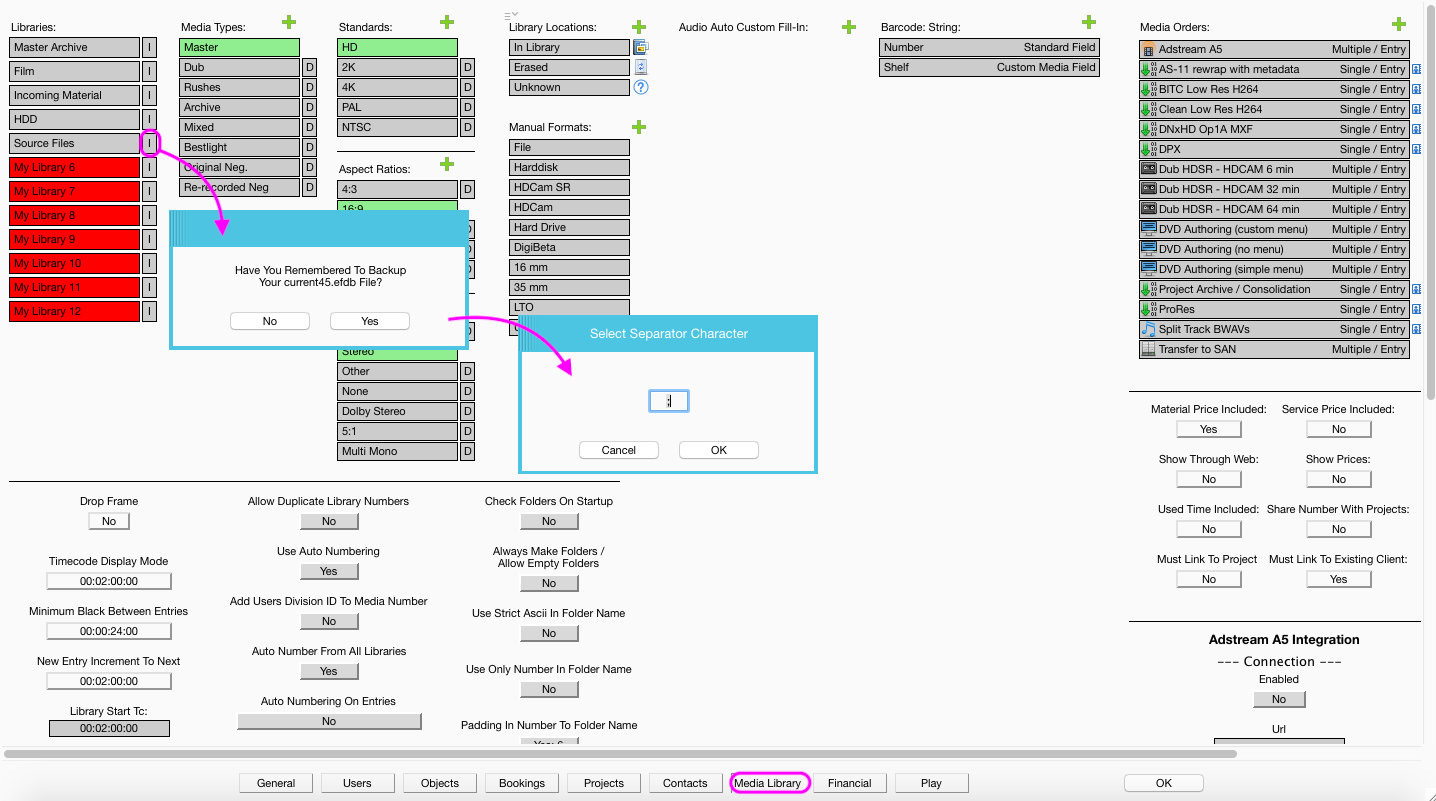 The Import Media window opens for mapping the fields used as column headers in the CSV with the fields in the farmerswife Media Library.

Clear All Tapes In Library When Importing: If selected, this option will delete all Media from the Library where the import is taking place BEFORE importing.

Tape Identifier: The list is displaying each of the column headers from the CSV file. The selected column name will be treated as an identifier, and all rows in the CSV file containing the same value on this column will be considered as Entries belonging to a same Media. The identifier is often the Media Name.

Re-Number Tapes When Importing and Re-Number Starting From: If the CSV file does not contain a column with a number for each Media to be imported, tick the checkbox to Re-Number Tapes When Importing. In the Re-Number Starting From field enter the first number to be used in the re-numbering. If, during the Import, farmerswife finds some Media already existed in that Library, farmerswife will automatically use the next available number.

Save / Load: At the bottom right corner, there is a Save button to save this mapping and re-use it on the same or on another similarly configured Library. To re-use the saved mapping click on the Load button and select the saved file. When all the mapping and Import settings have been done, hit OK and the Test Import window will display the mapping.